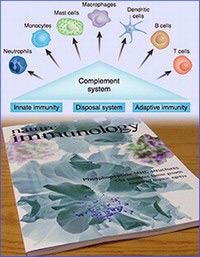 A multidisciplinary approach to today’s challenges in complement research

Using complement as a model system, we apply ideas and methods embodied in engineering, computer science, physics, chemistry, and other fields to address today’s challenges in biomedical research.

The complement system has been long appreciated as a major effector arm of the innate immune response. It consists of a complex group of serum proteins and glycoproteins and soluble or membrane-bound receptors, which play an important role in host defense against infection. Complement, a phylogenetically conserved arm of innate immunity, functions together with the adaptive immune response by serving as an important inflammatory mediator of antigen-antibody interactions. It also provides an interface between the innate and adaptive immune response by contributing to the enhancement of the humoral response mounted against specific antigens.

In an era that nurtures the integrated study of biological systems as the prevalent concept in contemporary scientific thinking, complement research is being revisited and our current knowledge of this innate immune system is enriched by findings that point to novel functions that do not strictly correlate with immunological defense and surveillance, immune modulation or inflammation.

Departing from traditional hallmarks of molecular biology such as the genome and the transcriptome and beginning to appreciate more the “proteome” as the dynamic expression profile and unique ‘fingerprint’ of all organisms, novel associations between biochemical pathways and apparently unrelated biological processes are constantly revealed. In this respect, recent evidence produced by our laboratory (and others) suggests that complement components can modulate diverse biological processes by closely interacting with other intra- and intercellular networks.

Furthermore, the structure and functions of several complement proteins as well as the protein-protein interactions that underlie these functions are now being investigated with the aid of cross-disciplinary approaches ranging from mathematics and biophysics to comparative phylogenesis, in silico studies, mimetics and proteomics. Our laboratory, extending its research beyond the scope of traditional complement pathobiology, has embraced this global and combinatorial approach to biomedical research and has been actively engaged in defining the function of complement proteins in several biological contexts and pathophysiological states.

Our current research efforts focus on the structural-functional aspects of protein-protein interactions and the rational design of small-size complement inhibitors. We also study the viral molecular mimicry and immune evasion strategies, as well as the evolution of complement biology. In addition, we study the involvement of various complement components with developmental pathways and the role of complement in tissue regeneration, early hematopoietic development and cancer.